Located in East Africa, just South of the Equator, Rwanda is part of the African Great Lakes Region. The country's neighbors are Uganda to the North, Tanzania to the East, Burundi to the South and the Democratic Republic of Congo to the West. It is one of the smallest countries on the African continent and has the hightest population density in Africa.

Karisimbi volcano, located in the Virunga chain, is the highest point in Rwanda at 14,786 feet above sea level.  Nyabarongo is the longest river in Rwanda and one of the main feeds for the great Nile. The capital, Kigali, in the center of the country, is the largest city with 1,052,540 inhabitants, and is known as the cleanest city in Africa.

Although located just below the equator, the climate is moderated by the altitude. Rwanda enjoys mild temperatures and stable throughout the year, with lows in the 60s and highs in the 70s, sometimes slightly cooler in some mountainous areas. The country lacks neither rain nor water. The high altitude forests maintain water supplies that feed rivers in dry periods (June-August).  On rare occasions there have been droughts in the country.

Rwanda has two periods of rain.  The long rainy season is from March to mid-May and the short rainy season from September to early December.

Rwanda was populated around the eighth century BC by the Batwa or Twa, a population of pygmies, that lived and hunted in the dense forest.  The pygmies’ ancestors had come from the West and spoke a Bantu language.  A few centuries later, an agricultural people, the Hutu came to the area.  They were joined by the pastoralists Tutsi people, that arrived sometime between the 1000 and 1500 AD.   These three communities of different origins assimilated over time and eventually shared the same Bantu language, Kinyarwanda (or Kirundi), the same religion, and in the end the same social lives.

There is no linguistic minority in Rwanda, because almost the entire population, 98% speak the national language, Kinyarwanda, the language of the Bantu family. Following the First World War, Rwanda was handed over to the Belgians, who introduced French as an official language. With the return of 850,000 Tutsi refugees after the genocide of 1994, the government adopted plans to make English the official language and gradually replace the domination of French. In 2003, English became the official language alongside French and Kinyarwanda, and since 2010, it is the only language used in schools.  The refugees have not only brought a new language, but also a new culture, with different customs and social practices that have further divided the Rwandan national identity.

Rwanda politics are strongly influenced by the consequences of the genocide of Tutsis in 1994, underdevelopment, and the instability of the African Great Lakes Region (Burundi, Uganda, eastern Democratic Republic of Congo). Indeed, this region has one of the highest population densities in the world, while the urbanization rate is still very low. Thus, there is a constant need for new farmland.

Since 2002, Rwanda has embarked on a long and difficult task of national reconciliation, through the gacaca (traditional justice exercised by community courts). The government seeks to erase the ethnic differences and return to a symbiotic relationship between people, as they lived before the arrival of the Germans, then the Belgians in the early twentieth century. Thus, the struggle against all forms of discrimination, judged as the origin of the genocide, is among the priorities of Rwanda.

Additionally, Rwanda has a favorable status in international diplomacy due to particularly good governance and responsible use of donor funds.  A highly successful campaign against embezzlement and corruption positions Rwanda for positive growth in the coming years.

Rwanda's economy is mainly characterized by its heavy dependence on agriculture, which accounts for 42% of GDP and employs 90% of the workforce in the country. While most Rwandans live on subsistence farming, some grow tea and coffee which are the main export oriented productions. The isolation and rugged terrain of Rwanda makes the development of transport infrastructure more difficult than in most other African countries.  But surprisingly Rwanda’s infrastructure is often considered more advanced than many of its neighbors.

The government has been actively trying to diversify income generation in the country through the development of the service sector, which today accounts for almost 44% of national GDP.  Tourism has been the fastest growing sector in Rwanda due to the fact that Rwanda is considered the safest and most stable in this part of Africa. The roads are paved, the landscapes are beautiful, and the people are friendly which further facilitates this growth.

Surprisingly ethnicity is not correlated to religious conviction.  In Rwanda 56% of the population are Catholic, 37% Protestant, 4% Muslim, and 1 % practice traditional beliefs.  The remaining 2% do not associate with a organized religion. 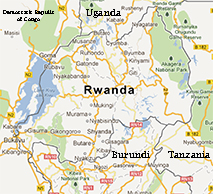